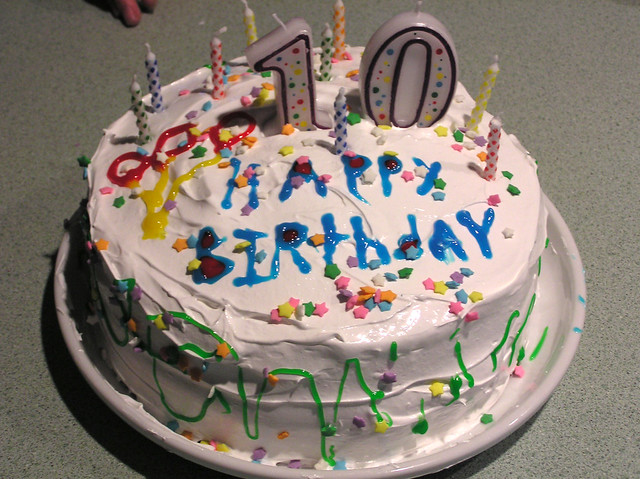 Today marks ten years of blogging here at edtechie. I had started a few blogs before, but this was the time I stayed with it. That ten years later I’m still doing an activity which is not part of my formal job description, is not recognised and is usually undertaken in my own time is a testament to the power of blogging in itself. But I’m not going to make this a ’10 reasons why you should blog’ post. I was struck by a comment Sava Singh made in her presentation at OER16 when she said that even complaining about how Twitter used to be better in the old days is a sign of privilege. She’s right, we old timers have a temporal privilege – anyone coming in to blogging now is starting out in a very different context. I recall Pink Floyd saying that they were lucky that when they started there weren’t many bands around, so they were given time and people who might not listen to them came to them for want of anything else. This is a very different scenario for an artist now, who must compete within the deluge of daily releases. And so with blogging, I had the good fortune to be able to build up a reputation when there wasn’t much around, it would be a very different story now. So, I’m aware that my story is not necessarily applicable now, but it’s the only story I have. So apologies in advance, this is a self-indulgent post.

As I’ve considered writing this post over the past week or so, I’ve reflected on why I personally like blogging. I don’t mean all the reasons we often give people, such as establishing an identity, increasing dissemination, keeping a record of your process – all those are valid extrinsic motivators, but what is it about blogging that appeals to me. I came to the conclusion that blogging was where I felt I really belonged. I had found my academic tribe.

People talk a lot about imposter syndrome now. Again, I appreciate I have a set of privileges which mean it is only a fraction of what others may feel (white, european, male), so please interpret this in light of how it shaped my blogging reaction only: I was comprehensive educated, working class, first generation at university. I was educated at a range of polytechnics, which post 1992 became new universities: Hatfield, Kingston, Teesside. All good places, but not the key to a network of influence. I didn’t feel any sense of being an outsider whilst studying because fellow students at Polys tended to be similar to me in upbringing. I definitely did feel it when I started working at the OU. I remember my first coffee break after joining in 1995 – everyone was Oxbridge educated, older than me and generally middle class. One colleague recounted a story of how Edith Wharton had bought him a train set when he was young. Yeah, we’ve all got stories about our family’s friendship with a famous author haven’t we? I felt like (and probably was) a yob. For the first year at least I expected someone to tap me on the shoulder and say, “sorry, we made a mistake”.

But everyone was friendly and supportive, and such feelings subsided. But it was with the advent of the web, and encouraged by my OU colleagues John Naughton and Tony Hirst (probably both outsiders also) that I took up blogging. At the time blogging amongst academics was still relatively rare. I used to tell people excitedly “I have a blog”. Now that would be akin to saying “I have a microwave” – not guaranteed but not worthy of comment. Blogs were like little beacons shining across the globe that would splutter in to life and look for fellow signals to respond to. I fell in with the North American and UK ed tech blogging crowd. And this is why I think blogging resonates with me – I generally like bloggers. I don’t like all bloggers and I don’t dislike non-bloggers, but there is something about the approach to blogging – the informal use of language, the sense of fun, the support, willingness to try new things and the personal, social element that appeals to me. I think nearly all of the bloggers who influenced me (George Siemens, Stephen Downes, Audrey Watters, Jim Groom, Bon Stewart, Alan Levine, Scott Leslie, Josie Fraser to name just a very few) were outsiders to formal academia to an extent. Indeed I think you had to be an outsider in those early days to get blogging. That’s probably why there was an inverse relationship between online and academic reputation. Blogging was the refuge of the outsider. This is less true now when it is an accepted part of a communications strategy and you can take courses on being an effective blogger. It is now more professionalised, but I still think it represents a more democratised, open space than formal academia and I still make new connections with people here. As a tenured Prof at a big university I can’t really claim outsider status any more, I’m one of ‘them’ now. But blogging was where I found an authentic voice and I still cherish that. Bloggers are still my kind of people.

I don’t know what its role is really in relation to my ‘proper’ work, but I’m okay with that now. When I retire I expect that the three people who turn up to my retirement party (under duress) may point to formal publications as an indication of my work, but I can think of no higher honour than if they declared “he was an allright blogger”.