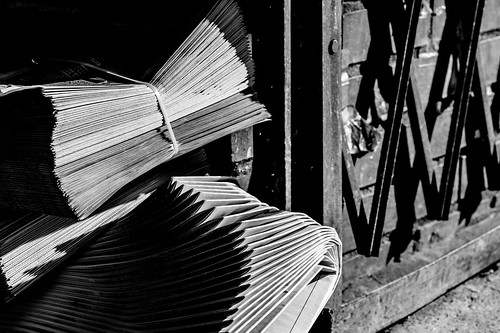 I’m on the advisory board for a project led by Laura Czerniewicz in Cape Town and Neil Morris in Leeds, examining the concept of ‘unbundling’ in higher ed. I came across unbundling first of all back in 2000 with Evans and Wurster’s Blown to Bits book. It’s important to remember that at the time, internet business was new, people didn’t know how it would turn out, and many were still saying it wouldn’t be a big thing. So anything that offered a reasonably intelligent analysis was seized upon. There was a lot that was useful in their book, setting out the idea that services that had previously been held together by the glue of physical location, became unbundled when they went online, because that glue was insufficiently strong to keep them together. Their classic example was the car showroom, which had new and used car sales, servicing and financing all in one place. Online, these became separate services. This all made sense, and we saw new car sales online, and finance was certainly affected. But car sales showrooms, still persist…

Like its close cousin Disruption, unbundling has been a favourite philosophy of the silicon valley start up. It has often been applied to education (even, erm, by me). This piece for example boldly states “The bundle of knowledge and certification that have long-defined higher education is coming apart”. The idea has some merit – if education moves online, do we need all the services: content production, examination, accreditation, support, etc to come from one provider? Maybe not, but higher education is not the same as car sales, no matter how much Richard Branson wants it to be. Selecting between those services is difficult, particularly for a learner who is a learner precisely because they don’t know what they don’t know. I know what I need to buy a car, even if I’m not a car expert. So having those elements in one bundle has a certain convenience. In short, the glue is stronger.

It is attempting to look for evidence for these in an unbiased, and rational manner. The problem with concepts like unbundling is that they get peddled by people who have an interest in getting the idea established (because their business depends on it), and then dismissed as nonsense by those of us inside the system, and the truth is probably somewhere in the middle. Research such as this can act as a “bullshit antidote”. One of the dangers is that the commentary Vice Chancellors and Principals get to hear is from the dynamic young software people with their unbundling start up. Being able to point to solid research that says things like “unbundling isn’t really happening on the scale they suggest” or “unbundling works well for these learners, but has these impact on staff” or “this model is viable, but has these costs”, or even “you can safely ignore it”. This is the sort of research we should be providing for a number of ed tech concepts I feel. Luckily as an advisory board member I don’t have to do any of the hard work, just turn up every 6 months and nod sagely.