During my inaugural I made extensive use of PollEverywhere, in order to make it more interactive and gain feedback (I also had a sore throat so these parts gave me a chance to swig water,  but let’s go with the pedagogic justification). Following on from the previous post detailing the theme of the inaugural, here are the responses to the questions, and some musings on what they mean.

First of all, lots of lovely people came in from across the globe (disc if you’re a flat-earther) which in a way, demonstrated the point I was making about exploring openness. These were often people I have met via blogs, social media, and open practice generally, and they were now participating in my keynote. 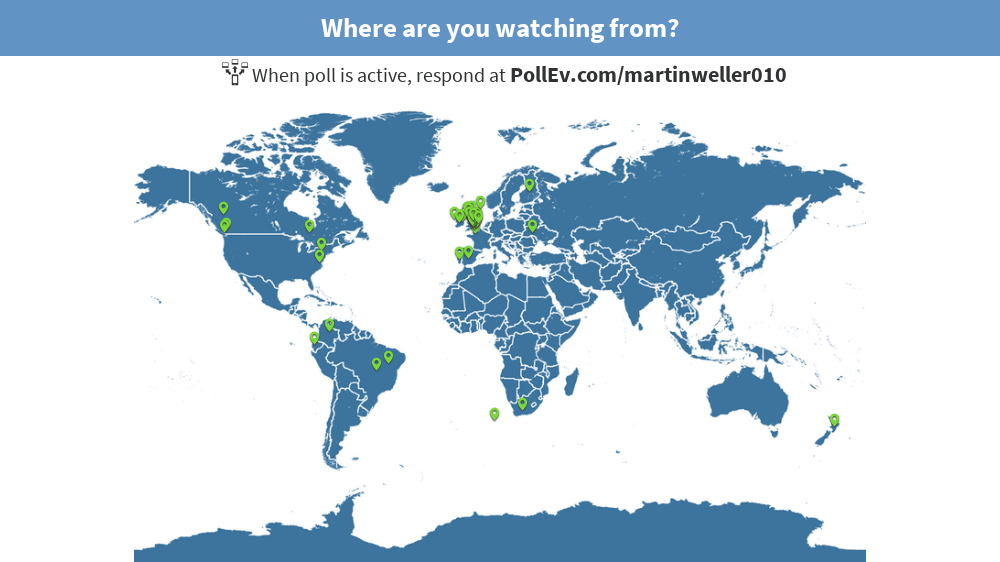 Next I asked what the ‘open’ in ‘Open University’ meant to the audience. Predictably this focused around access to education, which the OU was specifically established to address: 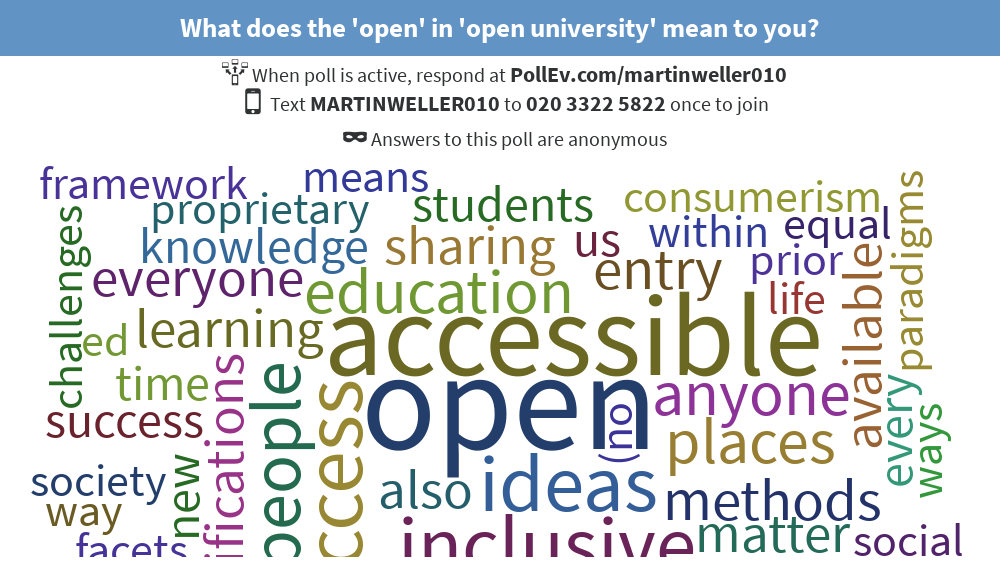 This provided the basis to explore different interpretations of open education, and at the end of this, I asked the audience to imagine that they were the Vice Chancellor for a year, and which area they would prioritise for development. Interestingly there was little love for MOOCs and OER (perhaps people feel that they’ve been adequately prioritised through FutureLearn and OpenLearn). Despite my prompting around open textbooks, the winner was open pedagogy. I did a similar presentation at UCL yesterday, and the results were similar. This indicates that exploring ways in which we can get students involved in aspects of open practice, and using open resources in teaching is what interests educators (perhaps unsurprisingly). I would suggest then that if you have an open education policy or initiative then framing it in terms of open pedagogy is a route to adoption. I would also propose that the OU makes this an explicit staff development aim. 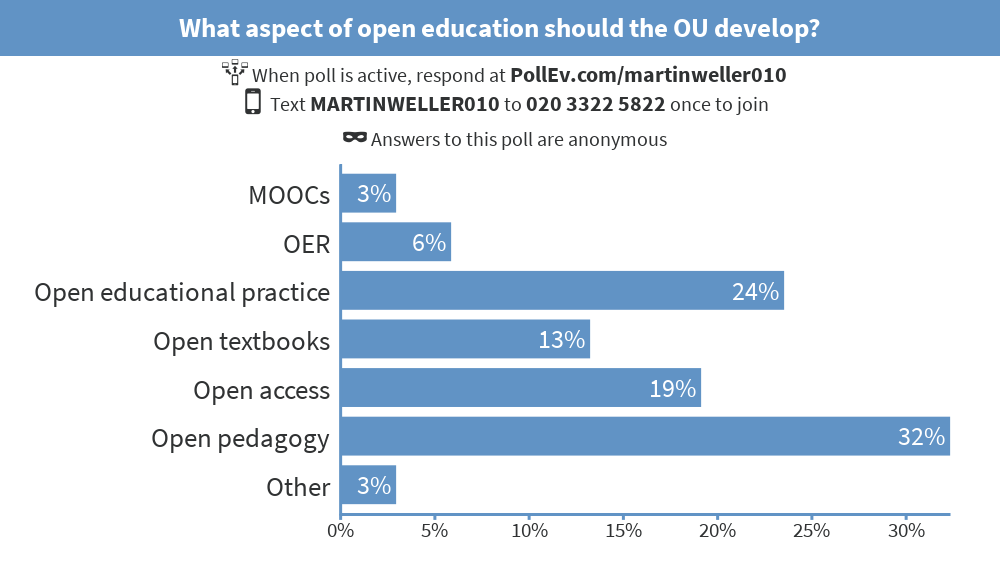 Then, I took people quickly through the OOFAT work, and proposed this as a means of considering institutional strategy. Of the different dimensions where the OU did not currently score highly (as rated by our own staff), where should the strategic direction focus? Here, the perhaps surprising winner was flexible assessment, such as being able to take assessment at different times, in different formats. 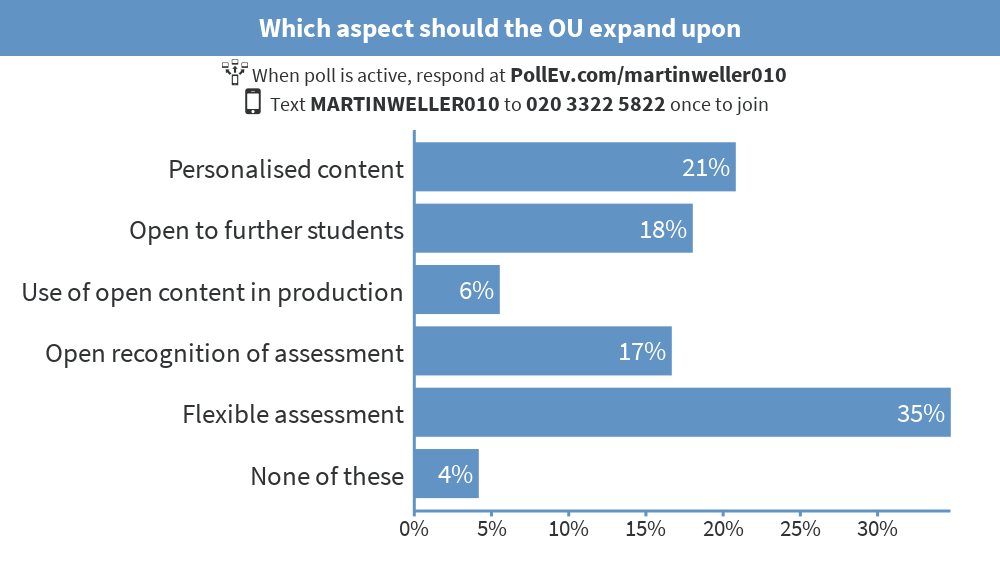 Lastly, I set out how open education, and by extension the OU, played a role in society. I asked for free text comments on completing this sentence, here are some of the answers. 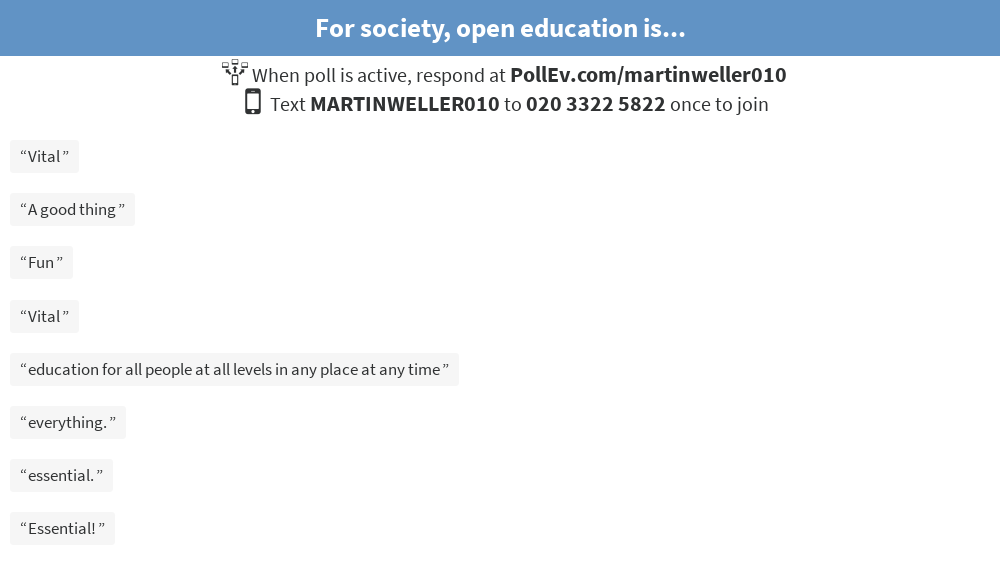 While not a representative audience on which one might base the strategic direction of a university, the use of polls in such a presentation, particularly with many students watching online via the OU’s Facebook page, could be a useful means to quickly acquire some sense of the relative importance of different issues, which could then lead to further investigation. I know I’ve banged this drum repeatedly, but it seems a cheaper, and more open way of realising this than paying PWC millions to tell you about your own institution.

Also, I expect I’ll overuse them, but at the moment I am enjoying the use of polls in presentations as a means of creating some dialogue, breaking the talk up and also opportunities for feedback, humour and spontaneity.

You can see my slides here:

Aspects of Open from Martin Weller