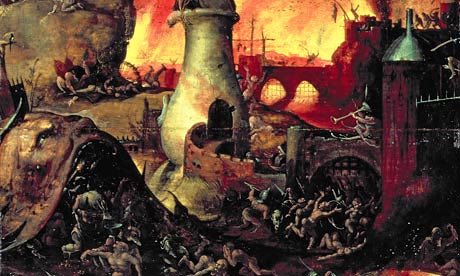 This piece by Beth Singler argues that much of the language of Artificial Intelligence has religious connotations. Audrey Watters also writes about myths and faith in Silicon Valley and ed tech. These pieces chimed with some thoughts I’d been having about how ed tech futures are pitched. There are some resonances with religious beliefs regarding cataclysm, and salvation I feel. This is not to criticise anyone’s religious beliefs, I should stress, but rather to offer some insight into the psychology of the ed tech futurists.

Central to many religious beliefs is a tale of the apocalypse, and an essential offer of salvation for believers. The Christian rapture is one example, but it re-occurs in different guises in many doctrines, which indicates that it is a meme that appeals in some deep sense to the human psyche. It’s not hard to see why, two very strong desires that are common to (nearly) all of us are a need to belong (identity theory suggests we define who we are by the groups we associate with) and a desire to feel special. And what stronger sense of belonging and feeling special is there to be one of the saved come the end of world? That’s a very powerful offer.

And much of this is hinted at in ed tech futurist visions. The basic premise is that there is some cataclysmic change coming to society and/or education – robots will displace all workers, AI will make educators redundant, there will only be ten global education providers in the future, everyone will become an autodidact, etc – which is pretty much catastrophic for the current model of education. And then comes the offer – by becoming a believer – in my start up, this particular technology, new labour force model, the latest “Uber for education” metaphor, the singularity – then you, and maybe some of your institution (although, you know, you’ll have to accept casualties) can be saved. But it’s a limited offer – there are only so many souls that can be saved, you have to get on board NOW, and belief has to be total (thou shalt have no other tech platform but mine).

Much of the language of ed tech futurists is couched in catastrophic terms: revolution, tsunami, disruption, fundamental change, broken, etc. So, slightly tongue in cheek, I’ve extended that by looking at the Wikipedia five ‘facts’ for the Rapture and translating them for ed tech:

I’d like to contrast this ed tech rapture approach with a more pragmatic one. I am a big fan of the Open Science Laboratory at the OU. They do really neat things like the virtual microscope, virtual field trips and live lab demonstrations with interactive elements. All of these really help students, and they’ve done enough research to find what they benefits are, how they can develop them, and what combination with other media works best. They are, in short, useful. No-one pitches ed tech like this as an end of education as we know it. They are focused on students’ needs, have evidence of impact, and are in use now without reference to an imagined future.

If you are at a conference or reading an ed tech article and it begins to feel a bit as if it is over-stretching itself, it’s worth asking if you are being given a ‘rapture’ pitch or a ‘useful’ pitch. I would suggest we’ve had enough of the former and need more of the latter.

PS – after I posted Audrey Watters pointed me to this piece on billionaires buying apocalypse bunkers. So a) this is not me imagining this rhetoric, it must be pretty prominent in their thoughts and b) they’re not even being metaphorical about this apocalypse stuff.