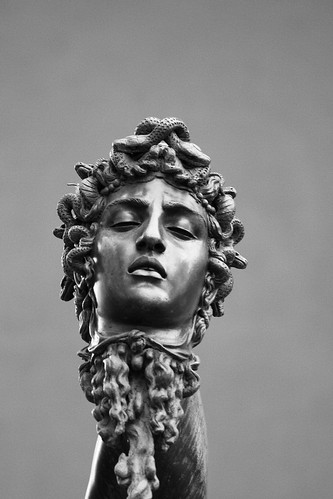 I was invited to Florence last week to give a keynote on Digital Scholarship. After the talk I had a walk around that beautiful city, and saw Cellini’s Perseus in the Plazza della Signoria. Looking at the statue with digital scholarship thoughts in my head, I regretted not having made it the springboard metaphor for my talk. It is, also I’ll admit, an attempt to irritate Jim Groom further with ridiculous metaphors. Like any great work of art Cellini’s Perseus can bear many different interpretations, many of them contradictory, and also suggest meanings that were never intended. So here is the talk I should have given: “Cellini’s Perseus – the Lessons of Digital Scholarship”.

The first of these is about representations of power, and more explicitly misogyny. If you’ve ever seen Cellini’s statue of Perseus you’ll know that it’s a visceral, dynamic, challenging piece of work. But it’s also a blatant representation of misogyny. Even at the time, Christine Coretti argues that the statue was intended to legitimize patriarchal power, and was in response to the growing power of Medici women. But further, the Medusa has long been a symbol of male oppression of female power. As Elizabeth Johnston argues the Medusa is a recurring theme, and can be seen as the original ‘nasty woman’.  Cellini’s statue was a major technological achievement, according to Cellini’s own account it was a Frankenstein act of insane, life-giving creation. This new use of casting allowed for a more realistic, vital medium, challenging the lifeless form of marble. This offered new possibilities, new means of interpreting and representing the world. But, as with online platforms we find that this new technology and representational form reinforced existing power structures, and indeed sought to legitimise them. When Rose McGowan is banned from Twitter while Richard Spencer continues happily it is easy to conclude that as with Perseus, so with Social Media.

The second interpretation is to view Medusa more straightforwardly as a monster, but one of our own making. When we look into its gaze, we are made inhuman. This is an obvious metaphor for the dark side of the internet. We created this platform and for all of its potential and positive elements, we have also unleashed the monster of trolling, fake news, alt-right, gamergate, etc. But Perseus can be seen as hope in this sense, we must slay the demons we have created by reflecting its own gaze back at it. The role of education is to act as Perseus shield in this respect, to develop literacies, tools and communities that use the communicative power of the internet as the means to take power away from the trolls.

The third lesson for digital scholarship relates to the famous blood of Cellini’s Perseus. Michael Cole has a whole article devoted to the discussion of the portrayal of blood, which was deemed shocking at the time, the John Carpenter gore merchant of its day. What the simultaneously realistic and otiose representation of blood flowing from the head and neck do is posit the viewer at the moment of death, the transition from the living state. The blood “reveals what life drains from the face and the limbs” as Cole puts it. In this Cellini’s Perseus reminds us what death really means. This continual connection to reality, to what our actions mean, how algorithms manifest themselves in people’s everyday lives is lacking from much of the ed tech industry. They all need a constant reminder like Cellini’s blood running through software coding sprints and venture capitalist huddles. It is the social impact of ed tech that we need to be grounded in.

Those are my (yes, tortuous) lessons for digital scholarship that can be found if you spend too long hanging around Florence with a head full of keynote and discussions. I’m sure given enough time I could extract some more. It’s a reminder to me to try and connect my talk with location anyway – or maybe not.