For the past five years I’ve done an end of year review of my running (2009, 2010, 2011, 2012, 2013) . It’s the only running post I do now, and I usually add some philosophical rambling to justify it. I’d like to do it again this year, to carry on my own little tradition, but it’s impossible to do a running review this year without mentioning the major life event that occurred, namely the (unexpected) breakup of my marriage. I don’t want us all to feel awkward, so I’ll keep that bit to a minimum, but basically, assume ‘running’ is a great big life metaphor throughout this post.

It’s been an up and down year with running, I trained for the Windermere marathon in May. Things went a bit awry before this, and it was agreed I would go up and do the marathon while significant things happened at home. Let’s just say I hope it’s a long time before I am again required to find the courage it took to complete that weekend and that race. The marathon was hillier than I expected (it was in the Lake District, why was I surprised?) and it was a hot, brutal day, so I limped around in 5hrs 15. But this one really was about completing – is it possible to be literally running a metaphor? 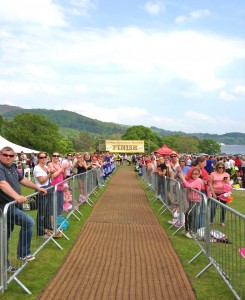 This was a welcome sight

I joined a local running club then, and June and July saw a real upsurge in the ‘running as therapy’ style. At this stage I was on target for about 1400 miles for the year. A holiday in Scotland with daughter reduced my mileage a bit, and I signed up for the inaugural Severn Bridge half marathon. This was hillier than I expected (you may detect a theme here), and for the first time I came in over 2 hours for a half. This was part of my build up to the Cardiff half though, so I wasn’t too bothered. However, my hip bursitis from a few years back began to niggle again, so in the lead-up to the Cardiff race, I eased off when I wanted to be pushing hard. In the end I was pleased with a time of 1hr 56 given this. 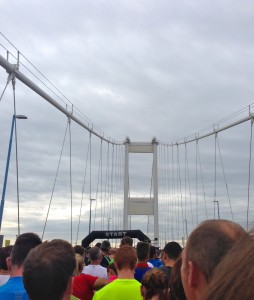 If they remade the Bridge in the UK, this would be it.

I then took 3 weeks off to rest my hip, and also had a week in Arlington, visiting George Siemens. I kind of lost my running mojo around this point, and with the annual goal of 1000 miles now beginning to be in doubt, I signed up for the Newport half in March. I’m the type of runner who needs a definite goal and a plan to stick to. This has meant that I have just passed the 1000 miles mark for the year, with a couple of days to spare. In the end I’m happy with this, any year I do a marathon, two halves and complete 1000 miles is a success. I know from having had years when I’ve been injured or not completed 1000 (see last year) I always berate myself ‘why weren’t you pleased when you did do it?’

The next year will be interesting in terms of my relationship with running. Over the past year I’ve developed, or resurrected, a lot of interests: I’ve joined a book club, I’m a Cardiff Devils season ticket holder, I watch a shitload of films, I’ve upped my cooking and gardening, and I’m completing my Masters in History (albeit with minimal effort). I’m unsure whether to continue this broad approach or whether to go deep in one, and whether running will be it, or if it will continue to be part of a mix.

Running is an odd pursuit, both boring and exhilarating, and also quite an existentialist one. As I plodded around the marathon, firstly my intended target time became unrealisable, then my revised one became problematic. But even at mile 16, with yet another hill to slog up, the race is both decided and yet undecided. You carry the story of the previous miles in your legs (have you gone out too fast, or been too cautious?) but yet much of what happens can still be determined, you can push hard for a few miles, ease off and make sure you finish, drop out and go to the pub, or find a new constant pace. Yes, it’s a bloody metaphor.