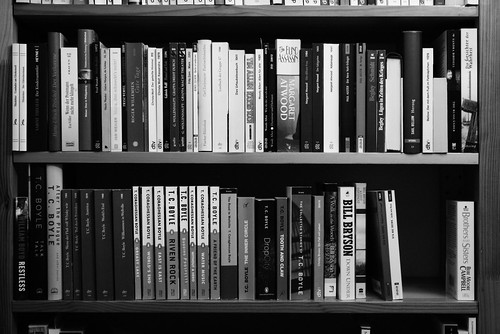 I’ve been having bits of this conversation with various people, so I’m going to try blogging it as a way of clarifying the mess in my head (a little).

During the recent OU Crisis™ one of the elements that kept arising on twitter discussions was students and staff saying the shift to online was flawed, and there was a strong preference for books. Similarly, in nearly all of our student surveys the components of a course that score the highest satisfaction are printed units. As one of the early proponents of online education at the OU, I used to resist this narrative, dismissing it as people sticking with what they know. But I have come to rethink that over the years.

The argument is often couched in terms of pedagogy, and the big benefit touted for print was being able to study on the move (the “OU student studying on the bus” became something of an overworked cliche). But with fairly pervasive mobile devices and access, that argument doesn’t carry as much weight now (there are some groups, eg learners in prisons for whom print is often beneficial). And yes, many students find reading off screen difficult. But that is partly habit and partly poor design if we are creating courses that are the equivalent of printed units online. Generally, the pedagogic benefits of online and digital for distance ed students are superior. I’m not making a claim about face to face campus education here, but a similar fondness for face to face tutorials over online ones can also be found as for print over online. The problem is attendance at online is far higher than face to face – so what people say they like and their behaviour are not necessarily the same thing. It’s a bit like opera – I like the fact that it exists, but I’m going to be found watching Netflix.

But I think these sorts of arguments, while valid, dismiss a very significant factor of being a (distance ed) student – namely the emotive element. As I’ve mentioned before, I started re-collecting vinyl recently. I could make an argument that it is about audio quality, which would be analogous to the pedagogy argument for print, but let’s be honest, it is an entirely emotional attachment to an artefact. I like having the physical object, just as some people need to have a physical book in order to feel they have read it. We should not dismiss or underplay the importance of this in education.

To consider the role of this emotional aspect, let’s look at just one issue, namely student retention, although we might think of performance, satisfaction or skills also. We know for instance, that students who form social bonds with others are more likely to complete their studies. We also know that student retention is lower for online courses as compared to courses utilising traditional methods of delivery. Chyung, Winiecki & Fenner found that the main factor which contributed to the decision on whether to continue or withdraw was the student’s level of satisfaction with the first or second course in the programme. Specific reasons for withdrawal included:

Now a text book or printed unit that a student feels a connection to could help address 1, 3, 4, 5, and 6 in that list. A text is something students feel familiar with already, and by establishing an emotional connection with the content of the course, they might overcome any subsequent issues.

It’s not the case that we should shift to print, and for instance, it might be different at Masters level than at level 1. Online probably _is_ better to realise many of the pedagogic benefits of distance learning, but the emotional attachment, comfort, security and manifestness of a physical object can usefully help support the online aspect. This might be the most important benefit that open textbooks could offer – making high quality, adapted textbooks economically viable to provide the benefits of the physical artefact, even if most of the actual teaching and learning then takes place online.