This post follows on from the previous one, which focused on the Open Education Beginners Guide. In this I want to look at the citation network in more detail. To restate, this work arose from some initial research Viv Rolfe did, exploring the references for open education. Using a bibliographic search for “open education” and related terms, she identified a set of publications in the 1970s and 80s, which referenced earlier foundational work. This work was largely a product of the growth of open universities and distance learning. However, what is more latterly often meant by open education (particularly in the US) rarely relates to this earlier work.

Katy Jordan then did some excellent citation network analysis, whereby each paper links out to its references, creating a spreading activation network. We started by using an initial sample of 20 articles based on the following search: ((“open education”, “open learning”, openness)AND(history,definition)). She then:

We then identified any gaps in the literature based on our collective expertise, and suggested further key references which might provide useful ‘seeds’. This gave a final network of 5,217 references from 172 articles. This gave the overall network shown below. You can explore a very fun and useful interactive version of this at Katy’s site which allows you to select each node (which corresponds to an article) and get citation and network info. 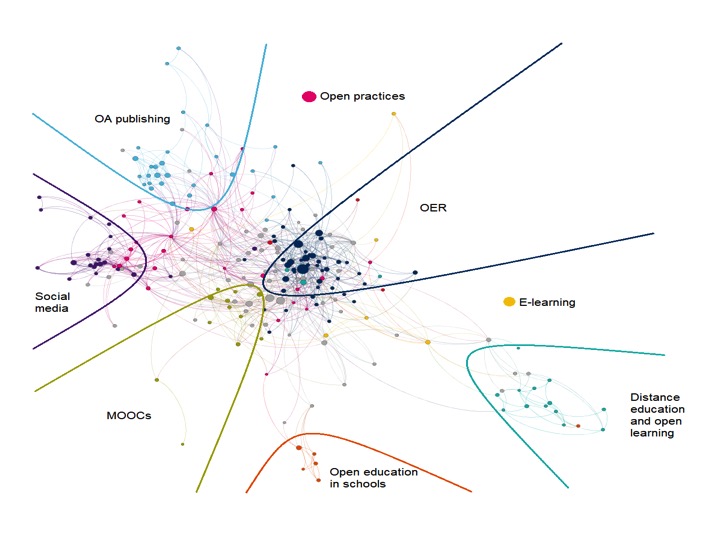 This network provides a means of visualising the broader open education landscape. What does it tell us then? Firstly, it reinforces the sense that Viv had from her work, and our grumpy old people’s conversation later, that the main references for ‘traditional’ distance/open education (the bottom right) are rarely referenced by ‘later’ open ed movements of OER, MOOCs, etc. But it also highlights that there is not much overlap between any of the areas, that is they rarely share references, and as a result any common understanding. Open education in schools seems worryingly out on its own also, with little connection into the broader OER or Open Practice community. Some clustering is understandable, for instance the area of open access publishing has developed on its own path, and often relates to very specific issues of library practice. Similarly social media (academic use of Twitter for example), is probably a bridging topic into other areas, such as digital scholarship, network society, etc. You could imagine this network expanding from here into other areas.

My two take-aways though would be:

It’s worth stressing some of the limitations of this study (the starting sample could be bigger, the starting references will influence the resulting network, further iterations could be implemented) – it should be seen as a starting point, rather than the definitive mapping. But nevertheless it provides a useful means of both approaching a topic, and thinking about the broader open education community.