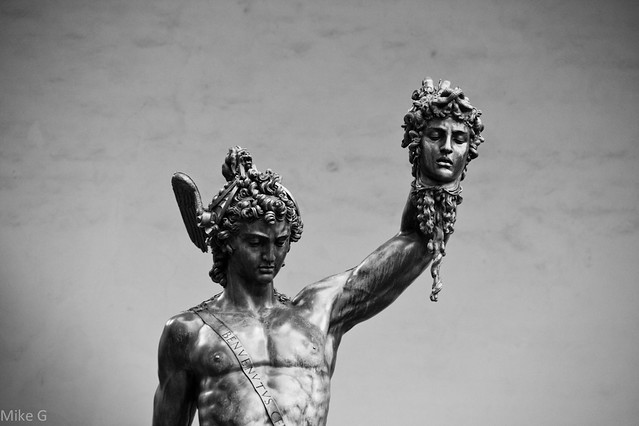 (There’s probably a really good metaphor I could make about this image, but I’ve included it just for the Vasari ref below and because Cellini was something of a ‘character’).

There was an article that did the rounds a few days ago about Ed Tech should become a discipline. And last week Audrey Watters gave a tremendous keynote which touched upon why she felt it was a bad idea (it’s worth reading Audrey’s keynote in full not just for the content but as an example of someone really crafting a keynote, developing an idea and articulating it with clarity cf. my approach of chucking together a bunch of slides at the last minute and mumbling my way through them). Audrey’s keynote is a plea for situating educational technology in a broader society and being critical:

“I want to suggest that what we need instead of a discipline called “education technology” is an undisciplining. We need criticism at the center of our work.”

I agree very much with Audrey, that too often ed tech is not critical, it idolises the technology, or at least fails to question what values it carries within its software kernel. But, I wonder (and I wonder a lot about ed tech without getting to firm conclusions), if some of these reservations might not be best overcome by ed tech becoming a discipline. Which sounds paradoxical, but bear with me.

For a start we should ask what we mean by it becoming a discipline? It should have its own journals? Tick. Its own conferences? Check. Recognised accreditation? Hello CMALT. A professional society? Nice to meet you ALT. So, in many ways, it is one already. I guess the defining characteristic though is a number of undergraduate degree in that area. There are a few “Education and IT” type degrees out there, but not really a range of Ed tech ones.

So how might ed tech being a discipline in this respect help? Firstly, it allows us to bring in a range of perspectives. One of the criticisms of ed tech is that people come in from one discipline and are unaware of fundamental work in a related one. So the Ed Tech discipline might well have components from psychology, sociology, education, computer science, statistics, etc. This would help establish a canonical body of texts that you could assume most people in ed tech are familiar with.

Secondly, another criticism of ed tech is that it lacks rigour. Claims are often based on anecdote, small trials, or just hopes about the power of technology. As well as establishing a set of common content, Ed Tech can establish good principles and process in terms of evaluating evidence. These first two I would argue are vital as ed tech becomes more significant in education and the claims made for it more extravagant (why are you thinking of MOOCs?).

Lastly, and for me, most interestingly, it creates a body against which criticism can push. By way of analogy, let us consider Art History, which I’m currently struggling through a Masters in. Art History used to be predominantly about the history of Art. Starting with Vasari’s Lives of the Artists it focused on the ‘great’ artists and their works. Later it shifted to talking about styles as a way of framing the history of art. But in the 1970s there was a reaction to this, bringing in marxist, feminist and multi-cultural perspectives. The implicit assumptions in the previous approaches were directly challenged, leading to the New Art History. Now Art History is as much about “Art History the discipline and practice” as it is about “the history of Art”. By making Ed Tech a discipline there is the possibility that we facilitate a similar perspective. You could only have a New Art History if there was an Old Art History. When a subject becomes a discipline, then it is not long before you get a version of it prefaced by the word “Critical”. Critical Educational Technology sounds fine to me, and could sit alongside Practical Educational Technology to the mutual benefit of both.