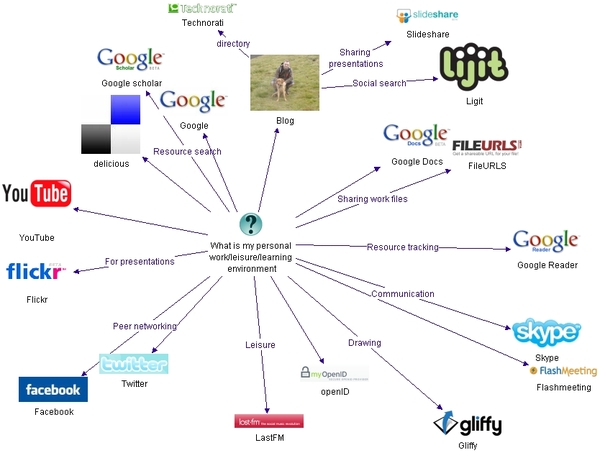 Personal Learning Environments (PLEs) were an outcome of the proliferation of services that suddenly became available following the web 2.0 boom. Learners and educators began to gather a set of tools to realize a number of functions. In edtech, the conversation turned to whether these tools could be somehow “glued” together in terms of data. We got quite excited about the idea of eduglu, which might be a bit embarrassing now. Instead of talking about one LMS provided to all students, we were discussing how each learner had their own particular blend of tools. Yet beyond a plethora of spoke diagrams, with each showing a different collection of icons, the PLE concept didn’t really develop after its peak in 2011. In 2014 I asked why we didn’t talk about PLEs anymore, and offered the following reasons:

These still seem reasonable, particularly the reduction in variety of tools. The problem was that passing along data was not a trivial task, and we soon became wary about applications that shared data (although perhaps not wary enough, given recent news regarding Cambridge Analytica). Also, providing a uniform offering and support for learners was difficult when they were all using different tools. The focus shifted from a personalized set of tools to a personalized set of resources, and in recent years this has become the goal of personalization. But that is a whole different story. I miss the excitement of having a favourite url shortener though.