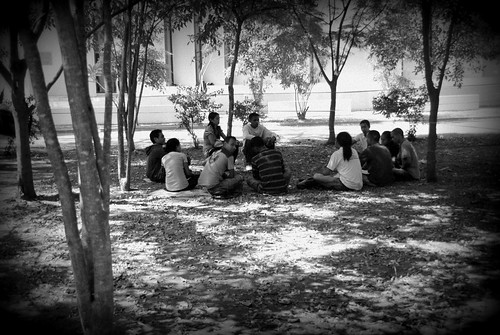 On Facebook, George Veletsianos asked “What educational innovation do you see as “democratizing” and why?”. Needless to say, I championed open universities. Not just The (UK) Open University, but the model which it first developed and which then got replicated across the world. Africa, Asia and Europe in particular adopted the model of a national, high quality, part-time, distance education university with low or no, entry qualifications. Each of these will have educated thousands of people who were previously excluded from education. It is hard to think of a single innovation in modern higher education that has had such a democratising effect.

While Canada has Athabasca, and TRU, the US is a notable absence in the list however. So much so that OU even tried to launch a US OU in the 1999. It did not go well. Open SUNY is a more recent attempt to fulfill some of this function.

But in the US, distance ed was usually allied to private colleges, offering correspondence tuition. Its reputation is not one of high quality. Similarly, when elearning gained ground, it was the for-profit provider, University of Phoenix, which gained the central position of part-time, online provider, rather than a national university. Much of the function of an open university is fulfilled by community colleges in the US, but these tend to be local based. We can probably think of several reasons why an Open University of the US never arose – the size of the country, decentralised education to states making a national university problematic (Athabasca suffers from this with provincial politics in Canada), the bad reputation of correspondence teaching, and a large for-profit sector that would see a national open university as a threat (and some form of socialism no doubt). And yet other countries have had these limitations, and with its narrative of the american dream, one could argue that an open university that allows someone to work while gaining a degree to improve their career, would be a natural fit.

I wonder if there had been a well recognised and widely respected US Open University, what the impact might have been? As I mentioned previously, I was surprised at how little awareness there was of the OU, even amongst people in the open education field, in the US. Playing ‘what if?’ I think a US OU would have made silicon valley ed tech less given to a year zero mentality. They would firstly be aware that MOOCs were not the ‘first generation of online learning‘ and also aware that everyone else is aware of this too. Also, there is a very healthy community of open universities, and given the prominence of the approach in Asia and Africa, this community is not a western dominated one. Open University type conferences look much more diverse than many north american ed tech ones. Being aware of, and an active participant in this community might have helped ease some of the cultural imperialism accusations against MOOCs. And open universities, although they can be reluctant and slow to adopt technology sometimes, generally have an approach to ed tech which is based on pragmatism and student benefit for the distance learner. This attitude is also absent from much of the ed tech start up rhetoric.

I’m not naive, even in the UK where the OU is well known, we still fall for hype, tech buzz and are guilty of insufficient diversity in ed tech. But it is nonetheless an interesting question I think to consider what the impact of a successful US OU would have had on the evolution of ed tech, both in the US, and as their developments have such a global influence, for all of us. In a parallel university maybe…