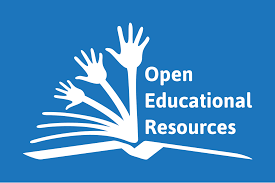 (As much as I love OER, this is a crap logo)

Now that the foundations of modern ed tech had been laid with the web, CMC, elearning, wikis, etc. the more interesting developments could commence. For 2002 I’m going with Open Educational Resources (OER). In the preceding year MIT announced its OpenCourseWare initiative which marks the real initiation of the OER movement, but it was in 2002 that the first OERs were released, and people began to understand licences (MIT would adopt Creative Commons in 2004). MIT’s goal was to make all the learning materials used by their 1800 courses available via the internet, where the resources could be used and repurposed as desired by others, without charge. At the time it caused a real stir, and lots of unis wished they’d got there first.

I covered the idea of Learning Objects earlier, and how they had taken their inspiration from reusability in software coding. The software approach, and in particular open source software also provides the roots for OER. The open source movement can be seen as creating the context within which open education could flourish, partly by analogy, and partly by establishing a precedent. But there is also a very direct link. David Wiley cropped up in the piece on Learning Objects, and he provides the bridge to OER through the development of licences. In 1998 he became interested in developing an open licence for educational content and contacted pioneers in the open source world directly. Out of this came the open content licence, which he developed with publishers to establish the Open Publication Licence (OPL).

The OPL proved to be one of the key components, along with the Free Software Foundation’s GNU licence, in developing the Creative Commons licences, by Larry Lessig and others in 2002. These went on to become essential in the open education movement. The simple licences in Creative Commons allow users to easily share resources, and wasn’t restricted to software code. Key to the Creative Commons licences are that they are permissive rather than restrictive. They allow the user to do what the licence permits without seeking permission. These licences have been a very practical requirement for the OER movement to persuade institutions and individuals to release content openly, with the knowledge that their intellectual property is still maintained.

OER has become a global movement since these early days. It has not transformed education in quite the way we envisaged back then, and many projects have floundered once funding ends, but through open textbooks and open educational practice (OEP) it continues to adapt and be relevant. I keep waiting for it to be the next major breakthrough, and I sometimes wonder what could have been achieved if OER had the funding that MOOCs received. But then it is a very different beast, embedded less in the silicon valley approach to education and more grounded in teacher practice. OERs are Mr Darcy to MOOCs George Wickham.

The general lessons from OER are that they succeeded where Learning Objects failed because they tapped into existing practice (and open textbooks doubly so). The concept of sharing educational content with a licence that doesn’t restrict this is alien enough, without all the accompanying standards and concepts associated with LOs. You need the component parts to slot into place: in this case the digital platform, open licences and the concept of sharing educational content. Also, you need patience, educational transformation is a slow burn. And get yourself a David Wiley if you can.