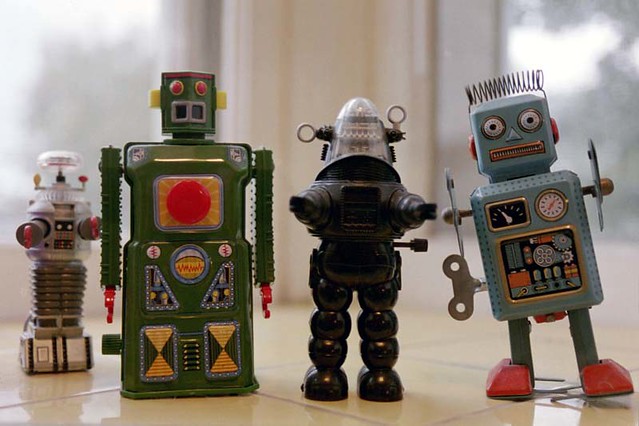 Robots aren’t really my area of expertise, but they’re this year’s thing, in movies and the news. This BBC article “Will machines eventually take on every job?” is fairly typical. However, I have followed the impact of digitisation over the past couple of decades, and I think the implementation of robots will follow a similar path. The difficulty is to tread the path between determinism, utopian and dystopian views, and excessive extrapolation. Also, there is a tendency to forget that pesky human nature in all of this. But we are well down the path of digitisation of a previously analogue world now, and this offers some useful lessons I think. I’m not making any claims that these are positive or negative outcomes, merely offering them as where I think it will go.

Firstly, we see the mass of mundane tasks are taken on. As with digitisation, where renewing car tax, shopping for groceries, and booking holidays were all tasks that people were happy to cede to a new digital version. This was usually quicker, more convenient and had distinct advantages. The same will happen for robots – in fifty years (or if you prefer, 100), it’s hard to imagine that we will still be driving to big supermarkets to trudge around and collect our weekly groceries. This stuff will be picked by robots, and delivered by driverless cars.

Secondly, we learn what we value and create artesan economies. This is where people tend to forget the impact of human nature. iTunes and Spotify may dominate the market for music, there has been a renaissance in the appreciation of vinyl. The coffee shop has flourished, as people buy the mundane stuff online, but decide they want to still exist in social spaces. So it will be with robotisation – your grocery stuff may be delivered by a robot, but you’ll value the expertise of the cheese shop run by an enthusiast down the road.

Thirdly, it’ll be both better and worse than we anticipate. In the early days of the digital revolution there was a lot of hope, and utopian vision around. It turned out to have many downsides (eg loss of privacy) that we didn’t always anticipate. The reverse may be the case with robotisation, the predictions are mainly gloomy (undermining labour, invasion of privacy again, loss of humanity), but there will be unpredicted upsides to it also.

There’s probably lots more, my main point is that we have lived through a very recent technology driven social upheaval, and that provides a good model for considering the next one.