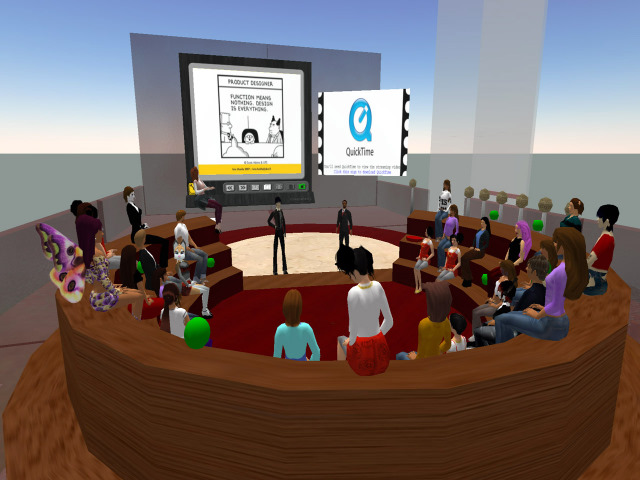 Online virtual worlds and Second Life had been around for some time, with Second Life launching in 2003, but they begin to see an upsurge in popularity around 2007. Colleges and universities began creating their own islands, and whole courses were delivered through Second Life. While the virtual worlds had strong devotees, they didn’t gain as much traction with students as envisaged, and most Second Life campuses are now deserted. Partly this was a result of a lack of imagination: they were often used to re-create an online lecture. The professor may have been represented by a seven-foot-tall purple cat in that lecture, but it was a lecture nonetheless. Virtual worlds also didn’t manage to shrug off their nerdy, role-playing origins, and many users felt an aversion to this. Interestingly these Dungeons & Dragons roots for ed tech keep recurring, when CMC was new, we had MUDs and MOOs. I’m not disparaging this, I’ve read as much Gary Gygax as the next nerd. But when these roots are so evident, it can be a barrier to those who aren’t so inclined. What this raises is the question of scalability – does every ed tech have to be suitable for everyone? Does it matter if some people feel put off by it? Does this advantage some groups and disadvantage others? These are genuine questions, and SecondLife is not special in facing them.

The technology could be glitchy as well, which meant that many people never made it off Orientation Island in Second Life. The problem here then is that the technology becomes a focus, the predominant topic of conversation. That is fun to explore if ed tech is your interest, but do the technology issues and the nature of the different environment get in the way when you’re teaching calculus, say?

However, with the success of virtual and augmented reality such as Minecraft and Pokémon Go, more robust technology, and more widespread familiarity with avatars and gaming, virtual worlds for learning may be one of those technologies due for a comeback. Like many other applications of ed tech, the pattern may be one of over-enthusiastic initial adoption, when it is applied as a universal tool, to more selective appropriate application now that enough general familiarity with the technology has be acquired.